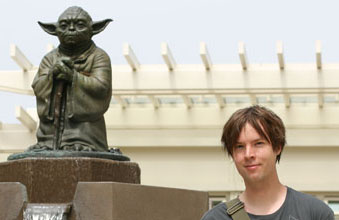 LucasArts day 5. First week on the job is over. And what a job that is: Lead Designer at LucasArts. Who would have though back in the days when I got my kicks playing Manic Mansion that I would work at this legendary company that has developed so many great games over the years. I just browsed through them and just look at this list:

And these are just my personal favorites!

So how is it working at LucasArts? I hope to be able to share some thoughts on that over the coming months. Some of you might already know about the awesome surroundings of the Presidio of San Francisco, where LucasArts is located. One of the cool things with that is that the offices are shared with Industrial Light & Magic, George Lucas’ special effects company,  which make some amazing people pass through these halls. Yesterday Ed Catmull gave a very interesting speech in the huge screening theater here on campus. This is the guy who has “Invented texture-mapping” on his resume! I just wish I was here a month earlier when David Fincher was here screening The Curious Case of Benjamin Button and doing a Q&A about it.

So, first week is over and I couldn’t be more excited to be here. And it isn’t only because Friday is Donut Day.

One thought on “Donut Day”