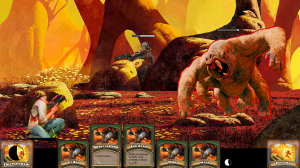 It always feels good when you spend a few hours getting that idea in your head down on “paper”. This is a concept of card-base adventure game with semi-realtime combat that I mocked up a few weeks ago.

Trading-card games as a mechanics for video-games seem to getting more popular every year. I’ve spent a bunch of time in the excellent Hearthstone recently and they nail so many things in that game. Blizzard being awesome as always.

Another interesting games in this space is Card Hunter, who has some great ideas to simplify the deck-building – the part of trading-card games that I don’t really enjoy.

I’ve been into using trading-card games as a game-mechanic all the way back since that Magic: The Gathering adventure game that I don’t really remember the name of. TCG comes with a number of great design-tools to build a game around, like a giving out cards to the player as rewards for completing tasks etc.

I actually did a prototype for a TCG a few years back as well. A goal with that design was to take advantage of being in a digital medium rather than design for paper cards like traditional TCGs. This way you can much easier have counters on the cards like Hitpoints etc. I wanted to have have a game where you had a party of heroes, that could generate different types of Mana/Power that could spent on cards/abilities. It was really fun to play around with, but I never got very far with it as I had Colors! 3D to focus on at the time. 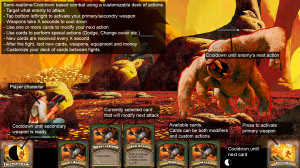 So, about the this mockup.. As with 99% of my game-design ideas, it is unlikely that this will make it past the “idea” stage, but just getting a mockup makes it feel like something more than just an idea in my head. And mockups are fun to make. Especially if you don’t care that you steal graphics from all over the internet. :)

One thought on “Sci-Fi card-game concept”