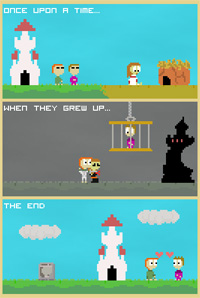 LucasArts day 112. So, I never followed up on GDC. The weather was beautiful and I had a great time seeing some of my old friends. I only had chance to attend one day of sessions but that meant that I got to see industry-legend Hideo Kojima’s keynote about Metal Gear Solids evolution and Keita Takahashi’s heart-warming talk about Noby Noby Boy. But the session that gave me most was the Experimental Gameplay Sessions. Again, it’s clear that innovation within games is often not coming from the established developers. It almost seems like we are returning to the age of the bedroom coders with very few right and wrongs.The thing that inspired me most was Daniel Benmergui’s presentation. I’ve always been a fan of truly interactive stories, and he is proving that there is still so much to explore. It’s hard to explain why, but his very simple game/experiment Storyteller gave me such insight that there are other ways to create stories in game than the branching story-line.